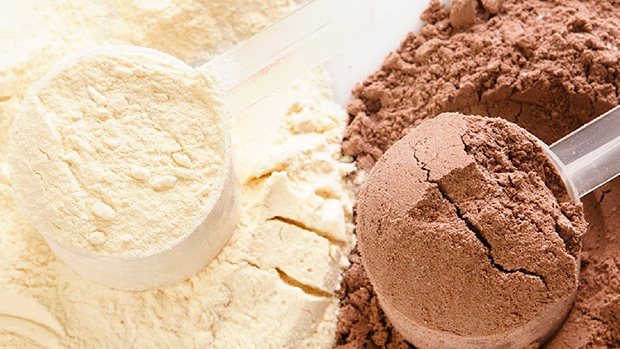 Avoid the fakes and choose the best protein for your goals. Here’s a handy guide.

The whey, sodium caseinate, or calcium caseinate wouldn’t be a complete waste of money by any means, but they’re not the right tools for this particular job. It’d be kind of like using a toilet brush to clean your choppers; you’d clean the front teeth well enough, but your canines, pre-molars, and molars would go unbrushed and turn a nice, mossy green.

The Main Difference Between Casein and Whey

There are dozens of studies comparing the muscle-building effects of protein and whey, with casein generally coming out on top. There are all kinds of reasons for this, but the main point is this: Casein is generally a better muscle builder, a better strength builder, and a better fat burner than whey.

The Treachery of “Fake” Caseins

Generally, people choose casein over whey because they want a slow-digesting protein that provides the body with a steady influx of amino acids while not dramatically raising insulin levels.

The trouble is, bargain basement proteins that you often find at Walmart or drug stores next to the hemorrhoid cream are often composed of sodium or calcium caseinate, which are absorbed by the body as quickly or more quickly than whey proteins. As such, they cause a rapid rise of insulin and likewise don’t provide sustained levels of amino acids.

While they’re not exactly fakes, they’re certainly not doing the job caseins are supposed to do. They’re like the knock-off Gucci purse your girlfriend picked up at the flea market that pops a stitch every time she opens it to pull out her I’m-Not-Really-a-Waitress red lipstick.

That’s not to say those proteins are entirely useless, though. While there’s nothing you could do about their anemic muscle-building properties, you could slow down their digestion by mixing them with food (e.g. oatmeal). Alternately, you could use them as a cheap, pre-workout protein.

If you want a casein that does what it’s supposed to do (digest slowly, build muscle, prevent muscle breakdown, etc.), get yourself some micellar casein.

The Elegance of Micellar Caseins

Micellar casein is composed of soap bubble like molecules (micelles) that form a bolus in the stomach when we consume them. As such, they digest really slowly.

It’s really hard to make a protein powder from micellar casein – hence their relative rarity and higher price. You have to handle it with kid gloves and leave the milk proteins largely unmolested. It’s almost like catching snowflakes in Maine and shipping them intact to California with a truck driver who stops outside a bar in the Mojave Desert to slam down a few tequilas.

It’s well worth it, though, because micellar casein is the only protein that’s been shown to be anti-catabolic (Boire, 1997), meaning not only does it increase protein synthesis it helps prevent muscle breakdown during and after intense exercise.

Unlike micellar casein, casein hydrolysate is heavily processed, but in this case it’s a good thing. The processing gives us two and three-peptide amino acids that have unique biochemical properties and are absorbed intact and don’t require any further digestion.

That makes them about 30% more effective than stimulating muscle protein than cheaper caseins (sodium or calcium caseinate). It also makes casein hydrolysate the ideal around-your-workout protein.

Why Whey Can Be Cool, Too

While generally not as talented in growing muscle, whey is often used in pre- and post-workout formulas precisely because it’s absorbed quickly, thus quickly supplying muscles with amino acids to muscles.

It’s real value, though, comes in its effects on the immune system. Whey concentrate, while being the cheapest and poorest muscle-building subspecies of whey protein, paradoxically contains the greatest amount of immunoglobulins, which are proteins that put a big hurt on viruses and bacteria.

Whey hydrolysate, on the opposite end of the whey spectrum, is the most expensive type of whey. It contains no fat or cholesterol, and is quickly digested, but sadly it contains no immunoglobulins.

That makes whey isolate, for most purposes, the best choice of the three types of whey protein. It’s fast acting, gently membrane-filtered to minimize lactose, carbohydrate, and fat, and then instantized for superior dispersibility. It’s ideal for jumpstarting the muscle-building process and it also retains a portion of the previously mentioned immunoglobulins.

The Right Protein for the Right Job